The creation of a world-class data and information provider

This is the story about how two childhood friends came together and created a startup with a global potential from day one. 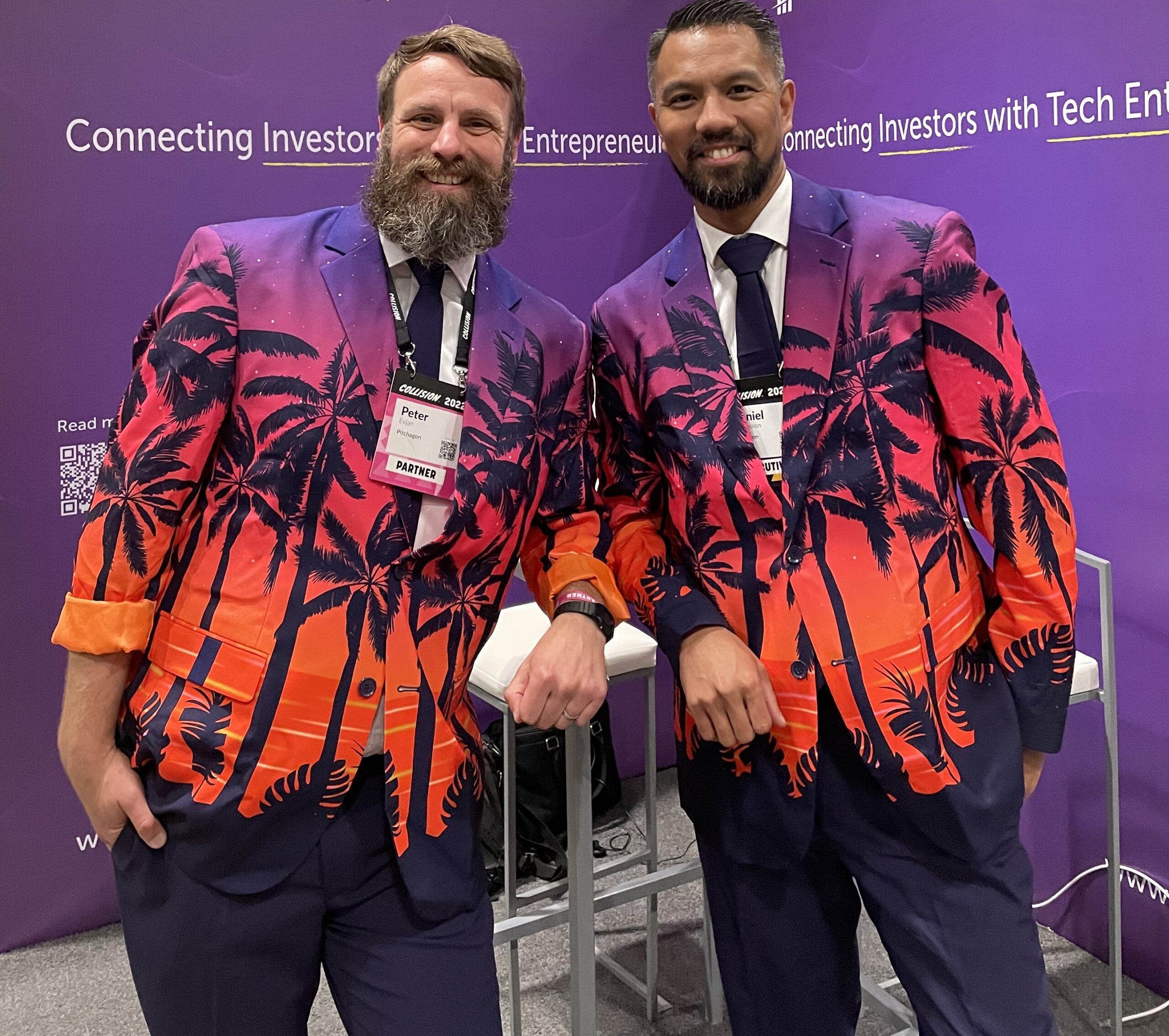 Daniel and Peter grew up as neighbors and met at the age of 5 and 6. Daniel has just gotten his first bicycle and was just allowed to bike around the block. Which he happily did. Over and over again. Peter’s mom noticed this and told her son that maybe that kid who was biking like a maniac around the block day after day maybe wanted to play with Peter but didn’t have the courage to ask. So she encouraged him to go after that boy and ask if they could play together. When Peter carefully approached Daniel that day, history was made. From that moment they were unseparated. More or less.

They became best friends and had each others back through elementary school, high school and eventually became room mates during college. But before college, Daniel started his first company at the age of 19, when he became Sweden’s youngest ICA retail owner of all time. Of course he hired Peter who at that time was a vegan but got a position at the meat counter. If that was a proof of Daniels convincing abilities or rather Peters kindness is hard to tell.

Daniel has always been more of an entrepreneur, with a never ending ability to come up with new ideas and solutions. Never afraid of testing new things and a mindset that everything is possible. Peter on the other hand has always been more settled. No need to show off or breaking new records. While Daniel studied Business & Entrepreneurship, Peter studied to become a programmer.

Eventually Daniel went on leading several companies where he managed to create unbeatable results due to his ability to lead and inspire people. He loves sales, marketing, leadership and personal development and have throughout the years continued to study these subjects and been able to merge these into one philosophy on how to create high performing teams. He also founded a management consulting firm with a focus on leadership development and how to make employees fall in love with the company and produce way better results than anyone can ever imagine.

It was obvious that out of these two friends, Daniel would become the eccentric entrepreneur with high-flying plans. But what wasn’t that obvious was that Peter would be the one traveling and living all around the world. Because of his profession as a developer, location has never been an issue for him, making it possible to live and work from anywhere.

After a period in Ghana, Africa, Peter and his wife decided to move to Melbourne, Australia, where he continued to excel both his skillsets and his career. During 10 years he was brought onboard on three different startups as employee number 1, all of which turned out to become $100M companies. He was always asked to be either co-founder or co-owner but his lack of entrepreneurial mindset and risk appetite made him stay just as a regular employee. But he was a damn good developer. Way better than he could ever admit himself.

The workplace that inspired Daniel

Daniel on the other hand became the CEO of the leading data & research company in Europe within the construction industry. The business idea of that company was to connect buyers and sellers in the construction industry. During 7 years this gave Daniel a lot of valuable experience since the company grew incredibly much. Both organically and through M&A. Daniel was away for one year and spent his time working as a Senior Investment Advisor to several Private Equity firms which came to prove extremely significant a little bit later.

When Daniel returned back to the data & research company, the focus were more or less on preparing the company for an upcoming IPO. Once that was done (at $1.6B, Stockholm Nasdaq Large Cap) Daniel decided to leave the company and instead pursue his vision of creating a world class information company but in a different industry than he had previously worked in – The Financial Industry!

He wanted to democratize the investment industry and make capital more accessible to more people so that more entrepreneurs can start, run and develop profitable and innovative companies that create more jobs. He knew from before how to run a successful data & research company. He just needed to adjust his new strategy a bit and apply it in a different industry. Instead of connecting buyers and sellers in the construction industry, it was now time to start connecting Investors and Tech Entrepreneurs!

But he couldn’t do this on his own. He needed a world-class programmer who could understand him and his passion for making real and lasting changes. He called up his old friend in Australia…

A no is not always a no

As a salesperson most of your time you’ll get a No. But a No isn’t necessarily a No. It’s a “maybe later” that eventually can (and will) turn into a Yes! You just got to have faith and a lot of stubbornness. Daniel knew that it was going to be tough to convince Peter to join him on his new business adventure but he also knew that it was worth a shot. The first “No” came as planned. So did the second one and the third one. But at the fourth try something unexpected happened. Peter said “Yes”.

The two friends started to plan and lay out some ground foundations on what problem to solve and what solution to create. Daniel was high on ideas and Peter took notice and surprisingly easy followed the theoretical discussion. It didn’t take long until Peter started to work his magic around building and coding a new SaaS solution. The company “Pitchagon” was born.

A couple of months later both Daniel and Peter felt like they needed some more skillsets to complement them both. They decided to bring in two new co-owners who also became co-founders. Together, the four of them, started to visualize and plan for what kind of company and employer they wanted to become. Fun, High energy, Opportunity to control your own time, Work from anywhere, Don’t take yourself too serious and Always develop yourself, were some of the things that stood out when they had finished their internal workshops around building an attractive company and workplace.

Data and information was gathered and the software was taking place. It was time to launch. The beta launch went well. Way above expectations. The first day they even received an offer to sell the whole company at a $7M valuation (!). The team didn’t even reflect over the offer, instead they looked at it as they were really on to something!

Fast forward a couple of months and the phone rings. It’s a polite still unpleasant conversation. It turned out that the company name cannot be used any longer since it intrudes on a EU trademark. Back to the drawing board again and this time to find a new catchy name to change into. Days goes by and no good name options managed to show up. Daniel decided to call some Private Equity folks just to get some feedback on the platform. During these calls same phrases appeared again and again –  “It’s great to find deal potential”, “all we want to do is find deals with potential”, and then voilá: DealPotential was born!

It’s maybe not the best name, maybe not even close to it, but for now it’s our name and we’re proud of it. It got potential…. DealPotential.

In June 2022 we sat our feet on international ground for the first time, when we as a team landed in Toronto, Canada, to participate as partners at the Collision Conference – the big investment and tech summit. And wow what a success! The response that we received was phenomenal and we were compared against the big players in the industry and were considered way better and much more simple to use than our competitors. Overall the reception we got was so much better than we could ever dream of (and yes they loved our suits, the ones Peter and Daniel are wearing on the top of this page), so the owners went back to Sweden, hosted an owners meeting and voted that the expansion plan will be North America next!

Ready or not, here we come!

The two old friends, Daniel and Peter, began to explore the possibilities of combining each other's long working experiences and building a new product in a new industry. Daniel had a management consulting background and had also, for the past 7 years, been the CEO of the leading European data and information provider within the construction industry.

Peter on the other hand, with a background as a software engineer, had been the first one onboard on three different startups, all of them eventually becoming $100M companies.

Now it was time to bring all this experience together. DealPotential was born.

You can't build a world-class company on your own.

Daniel and Peter decided to bring in two new partners as co-founders to increase the skillsets and at the same time get an investment to stretch the runway.

The heavy liftning began and data was collected, a software was created, beta clients were brought onboard, feedback was gathered from several investment firms and a lot of "trial and error" 24/7.

After a lot of data gathering and development of our platform we were finally ready to launch our business. The moment we all had been waiting for was finally here - time to go LIVE!

Very early on we got accepted to two different Accelerator programs. Newchip from the US, and Movexum in Sweden. This helped us transform and build important network with several key connections.

Newchip provided us with a mentor (she's fantastic by the way) who is an expert in Sales growth.

Movexum provided us with an excellent Business coach (Angelica) who works with us on a regular basis. She is invaluable to us!

In early 2022 we brought onboard our first employees - our Venture Scouts.

They were not here just fo fill some positions, they were here to be part of shaping this company's future.

In less than 3 months we managed to attract paying clients from 11 different countries.

We also developed our amazing Research team and created collaborations with several research networks all over the world, enabling us to move forward... fast...

Our History Is Still Under Making!

We’re on a mission to democratizing the capital market.